Closing my eyes,  I can still picture those mountains in my mind.

The memories are beginning to blur and fade a bit now and those once-vivid colors are slowly giving way to a more tinty, Polaroid hue. They float there sometimes… just out of reach but somehow… still,  the heart-shapes remain the same.

Sometimes even the pain doesn’t seem as black as it was. Although every now and then, something scrapes and pricks my heart just enough to sharpen the view again. My throat catches and pulse quickens just moments before my mind has a chance to kick in and remember;  that was then–this is now,   Jesus is here.

Oh, but it wasn’t all bad
growing up in those mountains.

Those were the days when our little band of neighborhood ragamuffins ran wild and free around those hills. Days when our weary mothers sent us outside to play never worrying  where we’d roamed until sundown. When there was nothing worse than getting stuck inside doing chores all day. So we’d pack a loose lunch and set out …. 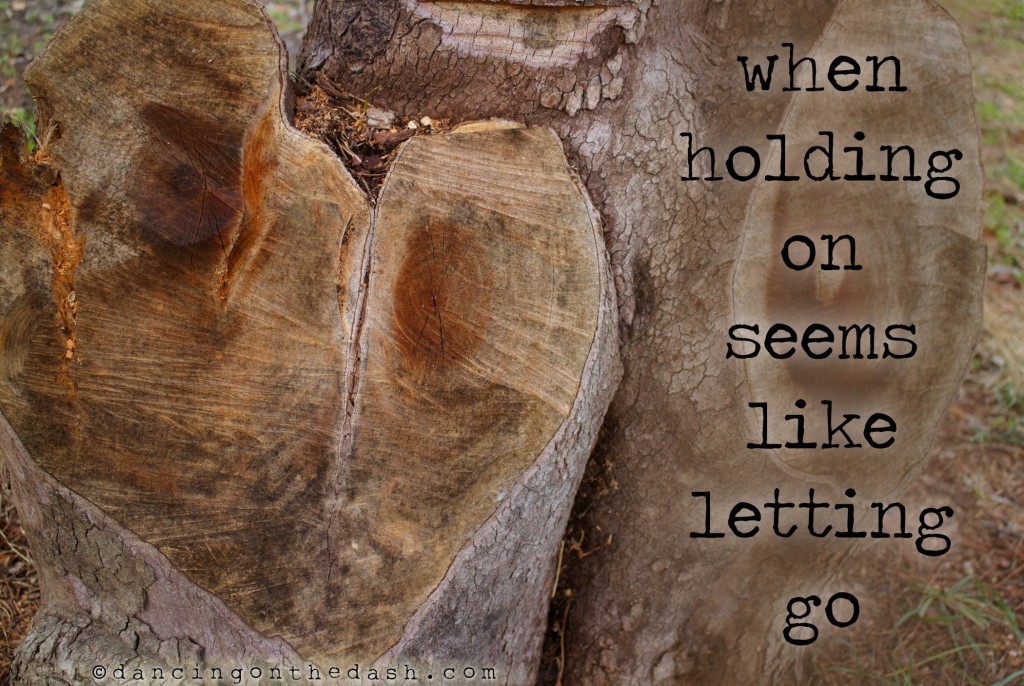 Our trailer park was carved into the side of the Appalachian mountains where two tiers of abandoned railroad tracks sliced through the ridges above. The first had been plucked up and was a wide dirty swath, overgrown, shady and cool. Known as the “motorcycle” trail, off-road bikes could be heard or seen screaming through the woods at any given point in time.  Here, it was a true treasure to find an rusty railroad spike to add to your collection.

The second set of tracks was higher along the ridge and much harder to get to. I can only recall a handful of times we ever attempted the climb, but the view was very much worth the effort.

We saw deer tracks, raccoon tracks and the occasional bear track. We dined like royalty in fields of wild mountain blueberries and strawberries. We chased down crawfish and drank water from the icy cold stream filtering through those mountain heights.

It’s a wonder nobody got sick or killed. Not once can I recall an adult in our presence as we wandered and roamed those hills like a band of homeless gypsies. We climbed high, built forts and took chances. We got dirty…really, really dirty.  And we never got hurt… much. 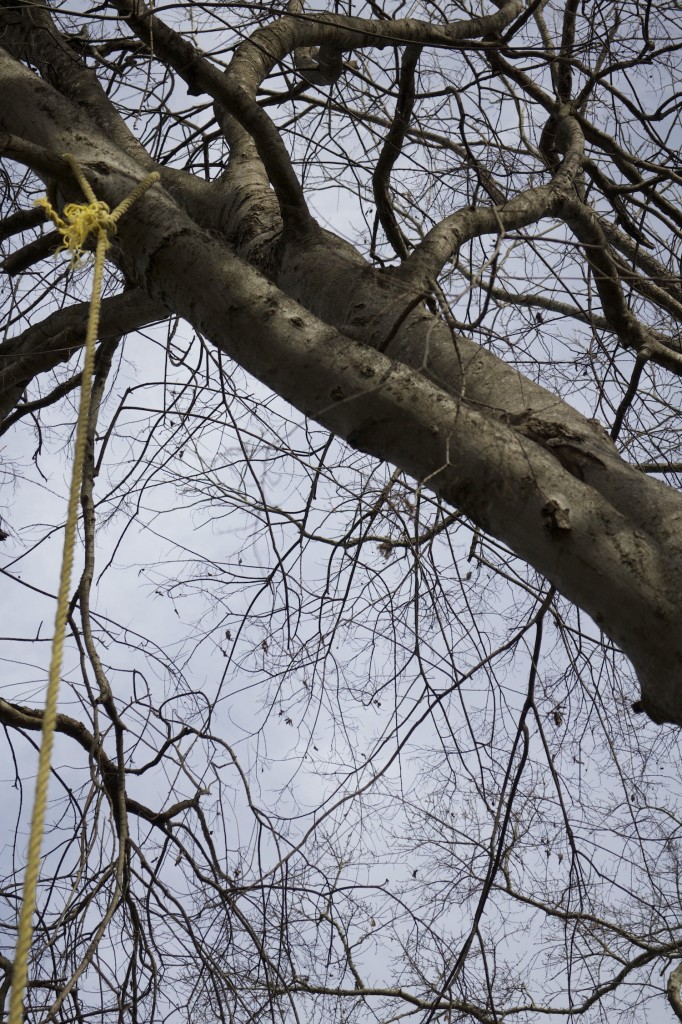 The Swing was just epic.  I mean..Eh-PIC.

The longest rope we’d ever seen and looped at the bottom was tied, tacked and taped to a limb on the biggest  tree we’d ever seen. Of course…we were kids so everything was huge-normous back then but people, this thing really was     the. bomb.

To ride, you’d have to climb up the ridge where a waiting (and trusted!)  friend would hold the loop open for you to get a grip on the rope and your foot “set”.      Then

You’d swing waaaaay out over the rocks and into a wide open area overlooking the ridges and valley below. Man.        We were stinkin FEARLESS! It was exhilarating!

The trick of The Swing was to make it out and back a few times on the momentum from that first push. Right about the time you were running out of steam, a friend would “catch” you and take the rope so you could hop off and help them take a turn.

Cool under it’s shady forest umbrella,  The Swing became the place for quite a while that summer and probably through the next. After exhausting our imaginations and energies through highly-competitive games of Four Square, Elimination, Rumikub and role-play of “Space 1999”, we’d eventually find our way back out to The Swing.

Fourth grade? Fifth? Gosh we weren’t that old….ranging from 10 to 13,  with the occasional straggler of a younger sibling in tow.

That’s what it must have been on the day my brother joined us. Two years younger than me, certainly not much bigger– I only remember he was there. I’d just landed back on the rocky ridge and now it was his turn. Dutifully, I held open the loop for his foot as he struggled to get a grip on the rope. He had to hop a bit to reach and grab on tightly.

What happened next seemed as endless as it is timeless. In one sharp second the loop, heavy with the gravity of his weight, trapped my hands around his foot as he pushed off. Sailing across the ridge, I dragged behind, my belly and torso slamming into and scraping along every rock in our path.

Coming to a stop, he jumped off, releasing my hands and stood staring down at me. I just lay there for..  oh probably forever and a half a day more.  Shock. I’m sure I was in shock.

When I was finally able to catch my breath, get up and walk home… I…don’t remember what happened next. Bandaids? Mercurochrome? Bruising? Probably all that and then some.

Of course…things have a way of changing even before you’re ready. Beyond that day I can’t recall many more afternoons spent at The Swing.  I know we moved not long after that and well,  life kept moving too.

A few weeks ago,  I had the chance to share a meal around a table with folks from many walks of life. The young man sitting across from me had recently hiked the entire Appalachian Trail and of course, I recalled my time in those mountains of New Jersey.  This story rose straight to the surface.

As I shared, all the while in the back of my mind,  I was thinking of my brother. I was thinking about where he was then and how much hard time had passed around and between us.

We were still as close as I could afford or allow.  Depending on his current mood or state of affairs, we might connect several times a week. Then would come the times when he’d turn dark. Darker than I or anyone else could handle with angry, accusatory words and threats of violence against himself and others.

Unfortunately, so many painful memories from that deeply dark and dysfunctional childhood we had shared had taken root and embittered his soul. An injury at work  was combined with several bad personal choices, which continued to be heavily marinated in alcohol, only deepening his misery and widening the gap between himself and anyone who dared to come near or tried to help.

During his dark and hateful moments, choices often had to be made, which sometimes  meant closing off communications for a time. Never permanently, but always and only just to have time to catch your breath from the last bruising.

It was necessary to say “enough” for your own sake.. and for his.

It was our choice.

I know he didn’t mean to hurt me. I didn’t want to hurt him either.   I truly, truly loved him and I believe he loved me too, right up until the very end. I have to believe he knew.

In the end, the choice he made to end his life was the culmination of several years of failed attempts. Many heard his cry for help and did whatever they could to help. He was a sweet man at heart with a soft spot for animals and the weak and defenseless.  He wanted to  play the hero in everyone else’s story but he could never be the hero of his own.

I will miss him.

I know I’m not alone. I know I’m not the only one out here traveling these sometimes hazy roads. Some reading are currently in these types of difficult relationships. Some have difficult days and decisions ahead. Some are struggling with the pain of regret and wonder….  “if only”.

Dear friend…if this is you…if you are hurting too, please let me know so we can walk this thing together with Jesus’ help. He is willing, waiting  and near..trust me, I know. 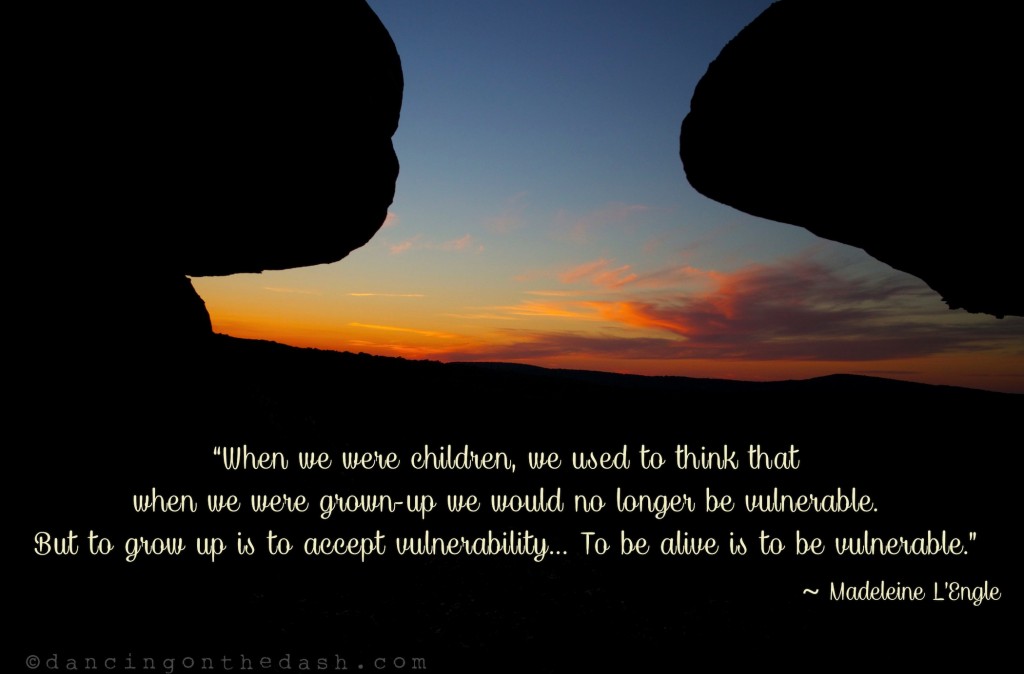 27 thoughts on “when holding on seems like letting go”