Despite a long period of drought, flowers are everywhere in this part of Africa right now. It’s the season for the winter rains and things once scorched and left thirsting beneath the punishing sun of summer are now relaxing and unfolding under the gentle encouragement of the slightest bits of water.

It doesn’t take much. Just a little bit can bring out the green in anything and the flowers can not resist the urge to seize the moment and burst into bloom while they have the chance.

Not every plant has a flower. Not every tree bears fruit, but those that do seem to know how to respond with the least amounts of nourishment. People can be much the same you know. At least this is what I have learned. Hope is a wonderful, nourishing thing;

the hope of Christ is life changing. 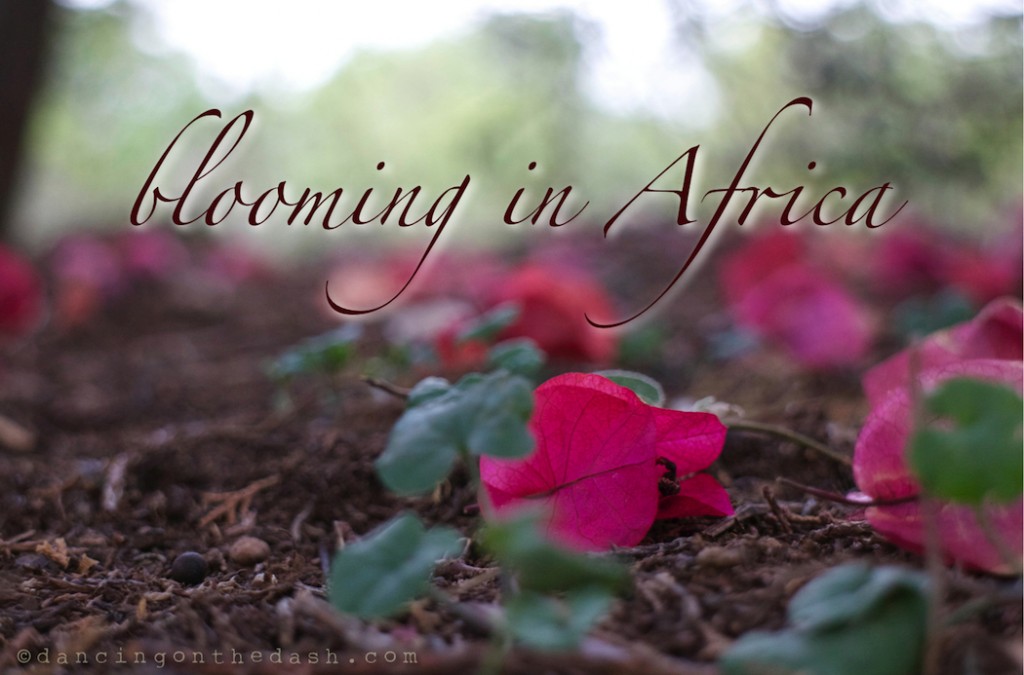 Born with a congenital defect, unmarried and living at home with her child, Rose’s lot in life was bleak at best. Life is hard enough for the able-bodied in this part of the world and for the disabled, the challenges are multiplied exponentially.

Perhaps it was the stark cruelty around her, or maybe it was the cruelty and rejection of others, the fact is; she was becoming hardened as well.

As a young woman, she had been sent through a textile training program, learning to knit sweaters and other clothing items but her disability left her unable to find a paying job in that industry and on the fringes of society.

Eventually, Rose was offered a position as a volunteer teacher in the new government nursery school program, which at least opened the door to the possibility of a paid position in the future.

When my friend Sandra first met Rose, every bit of her demeanor seemed to match her twisted, four and a half-foot frame. Cold, cruel and demanding, Rose stood at the front of the schoolroom full of 3-5 year old students pounding out the basic recitations with a stick in her hand, ready to strike at the first sign of disobedience.

Not exactly a golden candidate for the teacher’s training Sandra came to offer, but Rose had been chosen to represent her community and despite her unlikely qualifications and disagreeable disposition, she began to train with the others.

It was the first drop of rain.

Little by little, Rose began to respond to the time, training and attention being offered to sharpen what turned out to be her natural skills as a teacher. Slowly her heart began to soften and unfold as she was guided by Sandra through the new curriculum and mentored by their mutual friend, Eunice.

It was this, combined with the patient witness of Eunice, Sandra and her husband Charlie, that eventually found Rose accepting the invitation to church where she, in her words,

“Heard the Word of God and became saved.”
The floodgates were opened.

The hardness of Rose’s guarded and toughened exterior seemed to melt away as the Lord became the guardian of her heart and soul. 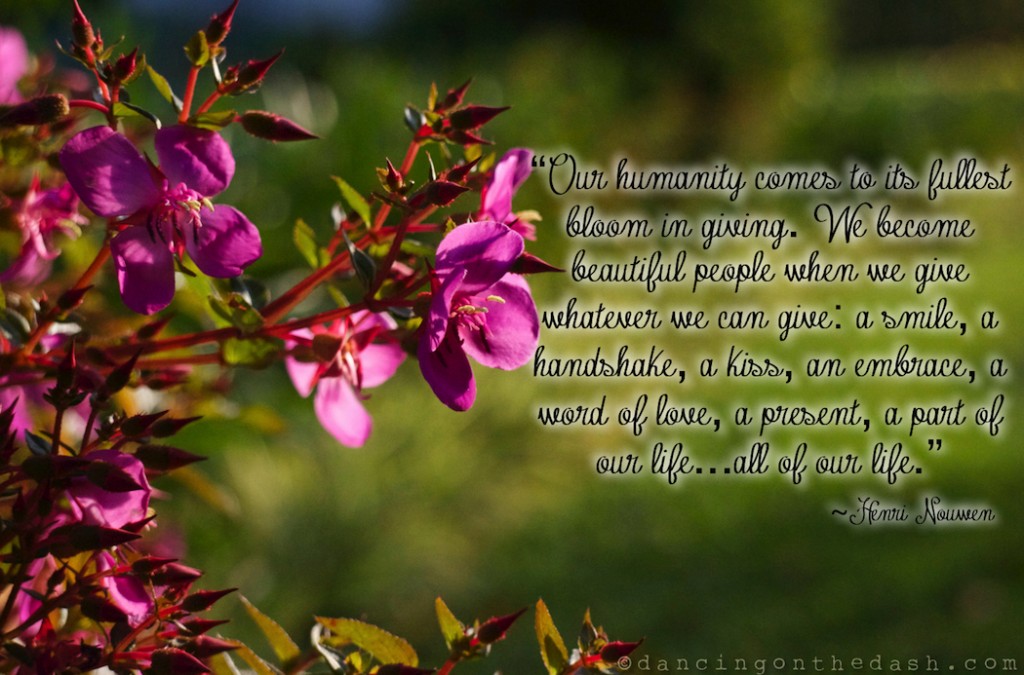 Sandra introduced me to Rose as we walked along the path celebrating the church’s recent baptisms. I can’t say I didn’t notice her deformity but I can honestly say that it wasn’t the first thing I saw. No… it was the light in her eyes that caught my attention as Sandra told me how Rose is one of the area’s best teachers and how her students place at the top when it’s time to move on to primary school.

We sat together in the fellowship of the other women, drinking chai from barely washed community cups and watching the children play in the dirt around us waiting for their meal.

Rose stood and taking her English bible, she began to read aloud. Then she testified in praise, how Sandra taught her to be a good teacher and how Charlie told her about the Lord and she became saved and “clever”.  Sandra reminded her that God made her clever. 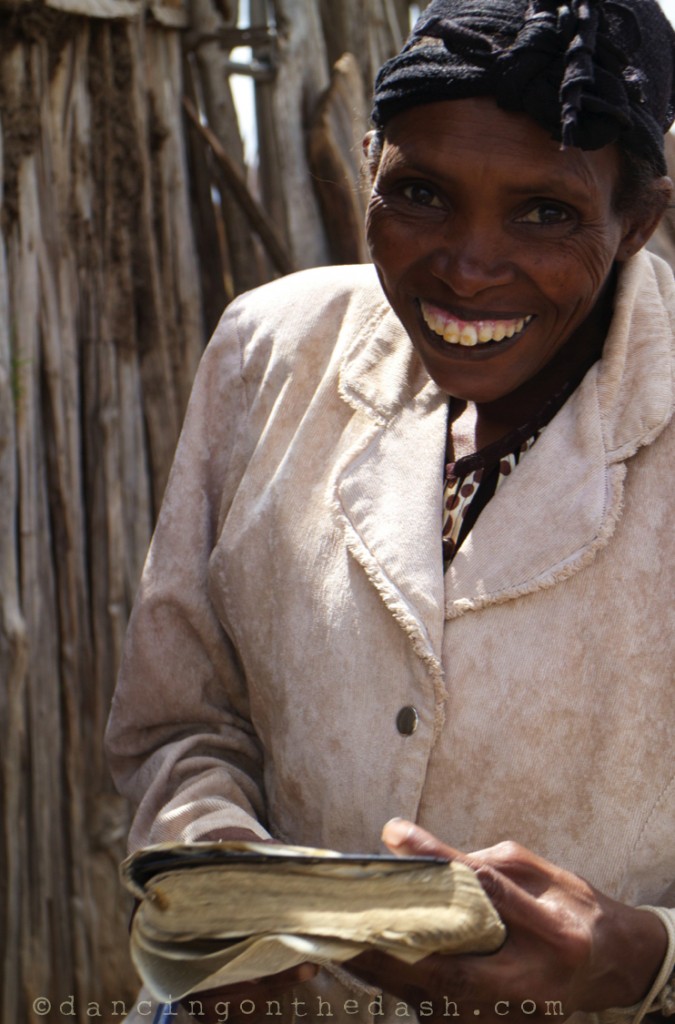 Flowers are blooming everywhere in this part of Africa right now…unfolding and relaxing beneath the nourishment of the winter rains. It doesn’t take much to bring them out of hiding– God knows just what to do.

And it’s the same with people.

God alone knows how to take a sweet “yellow rose” from Texas and bring her alongside a precious sister in Africa to show her the patient love and mercy of the very One she needs.

And only God can cause a rose to…. bloom.

blooming with God in Africa,

11 thoughts on “blooming in Africa”